Posted on July 2, 2011 by juanmanandhisdug

This is the first entry that has been prompted by a request from one of my three “loyal” readers. Should I be concerned it was a request to know more about the transport infrastructure? Or more concerned that my initial thought was “What a grand idea”?

After a period of not so sober reflection I consoled myself with the fact that there is a little of the trainspotter in all of us. (I am aware this is justification on a “I was only following orders” scale but, dear reader, leave me alone with my self-deception).

First thing to say is that the transport system, as I have said before,is reliable, cheap and reek of rancid pish-free. As mentioned in a previous entry I used to live next door to a fella who was involved in the organisation of the ’92 Olympics, privately the decision was made to spend the bare minimum on the venues and divert as much cash as possible into improving the infrastructure to ensure Barcelona’s long-term future as a tourist destination. One area where they spent the cash was on transport links.

To deal with the much cheapness angle first, as a local or a visitor the purchase of a T-10 is item one on the agenda, this is a ten trip ticket, valid on the bus, metro and train and jumping between each mode is still deemed one trip. At around 8 euro they are fantastic value but that isn’t the most impressive thing. What impresses me most is that the zone the ticket covers is around 20 miles to the south of the city and around the same to the north.

For the average tourist, staying centrally the best way of getting around is the metro. As with all modes of transport here it’s reliable and clean. If you can “go” the London Tube system then the Barcelona one will be a piece of piss. It’s all properly signposted, has an easy to understand map and the stops are all reasonably close together meaning wherever you are in the centre you are rarely more tha a short stroll from a station. 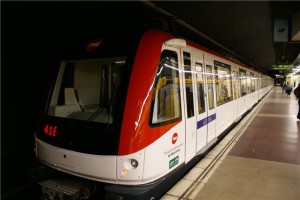 Only two words of warning, in Summer, although the trains are air-conditioned, the stations themselves are hotter than The McCutcheon in a bikini, the other is that changing lines at one of the main hub stations, Passeig De Gracia can be a helluva trek, one change of line will have you looking for a taxi.

If you want to avoid a taste of where  most of us are likely to end up come Judgement Day then the bus is yer kiddie. As a Glaswegian who was used to the driver being cocooned in a booth originally designed for Hannibal Lecter and the interior of the buses themselves giving the impression (and odour) of being decorated in “H-Block chic”the buses here were something of a shock. Cleanliness and comfort were a first for me. One complaint is that the maps on the back of the bus stops can be a little difficult to understand but it’s a minor gripe.

On a similar theme those of you who are familiar with the train network in the UK will be horrified with the system here. Cheapness and reliability being utterly alien concepts to the humble Brit. This factor is something you should consider if planning a holiday. You can have a traditional family beach holiday either up or down the coast in the knowledge that you could happily spend a couple of days of the holiday in the city safe in the knowledge that the trip won’t eat into your holiday time or budget too much. A family of four can get to and from somewhere like Castelldelfells into the centre on the same T-10. Definitely worth considering when planning the annual family holiday as opposed to the city break option.

I can’t do a bit on the transport system without a word for the taxi system. By UK standards it is remarkably cheap. A journey from Pl Espanya to Torre Agbar (These being at opposite sides of the main city part of Barcelona) will be around the ten euro mark. The taxis are clean, plentiful,most drivers take the direct routes and I am told they are far less “rapey” than their counterparts  in other cities.

I am painfully conscious that this blog has a “everything in Barcelona is better” feel about it but what can’t be avoided is that when it comes to public transport the City council have got much more right than wrong.

As a final comment,should any of you be travelling with people with physical disabilities (Ginger hair included) the entire system is very wheelchair friendly, all the buses have  ramps and all the train and metro stations are wheelchair accessible.

So, there you have it, a blog on the transport system, I’m now going to slip on my anorak and head off to take down some train numbers.

As a word of thanks to the chap who gave me the suggestion I heartily recommend this Daily TV and scran e-mail www.tvbite.com

Used to live in Barcelona, now in Chorlton... It's not *that*bad
View all posts by juanmanandhisdug →
This entry was posted in Getting around. Bookmark the permalink.