As Mike Yarwood used to say..

Posted on April 1, 2011 by juanmanandhisdug

“And this is me”…I make no apologies for another bit of self-indulgence in this entry. As a tourist what you should take from this entry is that there is some damn fine entertainment to be had in some unlikely places.

Although I live near a major tourist attraction the actual barrio (area) is a “working barrio” and has a fine mix of cultures and degrees  of mental health. One of the things I enjoy about this city is that it doesn’t, in the main, have the same edge as you’d get in certain areas in major UK cities, especially in neighbourhood bars, they are far less stabby and fighty than their UK equivalents. I’ve lived in this area, on and off, for nearly four years and a regular haunt during this time has been a bar that is a mecca for the more colourful local characters. 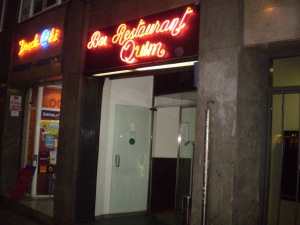 A mecca for the local fannies

With a name like “Quim” there was no way I wasn’t erm…going to enter its portal. (I am aware that I have readers who have may never have been in Quim, some who if they saw it couldn’t stay out and finally those who would only be able to stay in it for a few seconds) If I am being honest in the time I’ve lived here it has gone uphill. When I first moved here I used it as a “Nightcap bar” as we staggered back home we’d stop for a snort to aid restful sleep. The bar has been owned by a family for over 50 years and at that time it was the eccentric granny who had the nightshift. It is fair to say that she was no stranger to a tincture and I cannot recall ever being in the place when she wasn’t ripped oot her tights wi’ the drink. Coupled with the regulars, 80% of whom would be sectioned in the UK, you can see the attraction.

Granny had a couple of party pieces, ordering a drink was an adventure, if she didn’t fancy reaching up to the gantry for the bottle you’d ordered she’d scream a fairly emphatic “NO” leaving you in no doubt that any debate was pointless.Her other party piece was slightly more disturbing, I can only assume that she had something of a phobia about visiting the toilet to the rear of the bar. The floor behind the bar appeared far more convenient. (Late night sales of tapas were, at best, poor)

When I do have visitors I no longer head to the centre to meet up with them preferring to show them the delights of my local area. So far I have yet to receive anything other than positive feedback about a sample of local life in a Barcelona barrio. A couple of years back we had a visit from Dom and Karen, a grand couple who live up that London and are no strangers to the better London drinking establishments. When we told them of this place they couldn’t wait to dive in. The exact details of the events of that night are lost in a mild alcoholic haze but I recall we did get the shouting and were served vodka despite no one ordering it and it was a piss-free evening. They loved it, and it shows that if you keep your eyes open there are some interesting experiences for the brave traveller available.

As outlined earlier, the bar has gone uphill in recent times, the younger family members have clearly tired of mopping up of a morning and the bar shuts around 10pm and now opens early of a morning (On passing it around 6am when walking the dog, I notice it is getting a good trade, mainly from young ladies who I assume have just finished a hard night’s work, attracted by the bar’s name I suppose).

When we got the dog it became apparent that when the weather changed and the terraces were shut that many of the places we normally used wouldn’t welcome the dog. At no time did I panic, I was well aware that there was one place in the barrio where we would be welcomed with open arms, the bould Bar Quim.

Despite being something of a shadow of its former self it still has its moments. If you see someone in the area who looks as though they may have mental health issues you can be assured that they will, at some point, take a wee drink in Quim. The regulars at the moment comprise, a dwarf, a lovely wee shiny, alcoholic homosexual fella who gets fantastically theatrical on occasion, an unremarkable middle aged fellow, well if you think that a well dressed man wearing a woman’s g-string over his dress trousers is unremarkable and a mad fella whose finest moment was when he took delivery of a pair of shoes that lit up when he danced.

I absolutely adore this place, I was always been drawn more toward pubs with character in Glasgow, ones that had a heavy scent of the harmless madness around them. For this reason this place, many ways is a real home for home.

Imagine me feeling at home in Quim, who’d have thunked it?

Used to live in Barcelona, now in Chorlton... It's not *that*bad
View all posts by juanmanandhisdug →
This entry was posted in Pl. Espanya, Zommer Content. Bookmark the permalink.