It’s all about the pork

Posted on March 2, 2011 by juanmanandhisdug

Back on the budget track with a hidden gem of a place right in the heart of the dodgy Raval. As you look down the Ramblas towards the sea the area to your right hand side is the Raval. Described in the approved guide books as “colourful and vibrant” more accurately described as “dodgy as fuck and batshit mental” by those of us who know it a bit better.

That said it does have some fantastic restaurants and bars so my advice is “don’t be a wee fanny” and when wandering about there keep your wits about you and you’ll be fine. Simple rules, don’t carry too much in the way of valuables and attempt to look like you know where you are going. There will be some toolbag wandering about, looking lost while on their iphone who will be an attractive prospect for yer robber types, their loss, your gain.

The next place up is Meson David http://www.mesondavid.com/ When making your way there I strongly recommend you come at from the Parallel side rather than the Ramblas end, the walk along from the Ramblas is “colourful and vibrant” to put it mildly. Try and get there for around 9 o’clock, any later and you could be waiting a while for a table.

As far as the scran is concerned stick to my recco and you won’t go wrong. If there are a few of you I suggest a pulpo gallego as a starter to share. The main course is a no brainer, pork leg. It’s a huge big dod of pork on the bone, served with chips and ask for some alli oli (garlic mayo) and you will come to no harm. I once took a bunch of pals there and two ignored my advice about the pork and went for the galician stew, holy fuck, a plate of tongues, baws and other unidentifiable bits of even more unidentifiable animals was put down in front of them.

This does not do THE HORROR justice

So, pork leg it is, get wired in about their house wine an all. A rerr feed, a goodly swally shouldn’t be anymore than 20 euro a head and every person I have ever taken here has had nothing but great things to say about it. What’s not to love? (apart from the risk of being robbed, obv.) 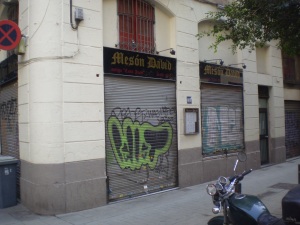 Meson David (They open the shutters,honest) 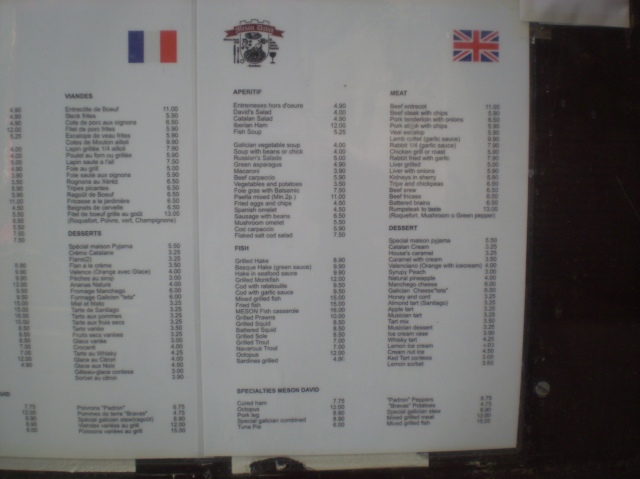 Menu GO STRAIGHT TO THE PORK LEG and yes, that is "Battered Brains" in the "Meat" section

Used to live in Barcelona, now in Chorlton... It's not *that*bad
View all posts by juanmanandhisdug →
This entry was posted in Cheap food, Don't be a wee fanny, Ramblas area. Bookmark the permalink.

2 Responses to It’s all about the pork